This broadcast was dedicated to Tommy Lasorda and USCP Officer Brain D. Sicknick

Miss out on the latest edition of “A’s talk from the fan’s point of view” with The DynAmic Duo of Cpl Oaktown and The Bauce Man. Well then, check the links below to view either the Twitch or YouTube version of our most recent show!

Thanks again as always for catching the action here on AFR. We’ll see ya for our next broadcast on 1/28 @ 8 pm PST sharp!

Miss out on this morning’s New Years broadcast? No sweat fellow A’s fans as the links to both the Twitch and YouTube versions of the broadcasts are down below for viewing access. Bauce Man also apologies for drinking a bit too much last night and passing out before the broadcast, which is what lead to it being a shorter show than originally planned.

Thanks again for checking us out and Happy New Year to all! We’ll see ya for our next show on 1/14 @ 8 pm PST. StAy OAklAnd, my friends!

Another Christmas edition of AFR is in the books, ladies and gents! Just in case though if you were unable to tune into last night’s live broadcast over on our Twitch channel with Cpl Oaktown (Bauce Man had the evening off as yesterday was his 38th birthday), no need to worry or panic, our friends. Links to both the Twitch and YouTube versions of last night’s show are down below for you to throw on while you wrap gifts, slam some eggnog or whatever you’re doing this week for the holidays.

Thanks as always for watching and a huge thank you to all who have tuned into our show broadcasts over the course of 2020, we appreciate all of you for the continued support. Take care, be safe out there, and we’ll see ya at 12:30 am PST (yes, you read that right, AM) on 1/1/2021 for our New Years show.

Miss out on the latest installment of Cal Athletics talk from the point of view of a couple of Tightwad Hill OGs out at The Concord Cottage in Downtown Concord, CA? Fear not, fellow Golden Bears fan/s, the links to both the Twitch & YouTube version of yesterday’s broadcast with 3oth Governor of Tightwad Keith Salminen & Donnie “Knucklehead” Hudson are right down below for your viewing pleasure.

Thanks as always for watching. The crew is gonna take 2 weeks off for the holidays before going back at it on January 10th, 2021 at the same Bear time on the same AFR Twitch channel. Take care, be safe, WEAR A DAMN MASK & FOLLOW COVID-19 GUIDELINES, Merry Christmas & Happy Holidays, and, of course, GO BEARS!

Miss out on the 5th instalment of this up and coming Cal themed podcast? Well, that might partly Keith’s fault as he didn’t put this post up when he got back to his place from The Concord Cottage, but hey, the man was burned out from a good show and maybe a bit too much “medical research”. Anyway, the links for both the Twitch and YouTube versions of yesterday’s broadcast are down below for you to check out what Keith and Donnie “Knucklehead” had to discuss on this go around of the show

Thanks for checking us out as always fellow Cal Bears fans. We’ll see ya on 12/20 for Show #6 before we take 2 weeks off for the holidays. GO BEARS!

The 2020/21 MLB Offseason rolls on and we are here as always to cover it for ya from the fans’ perspective. Click the links below to see what ya might have missed on this edition of the show with “The DynAmic Duo” of Cpl Oaktown and The Bauce Man.

Thanks again for watching and we’ll see ya on 12/21 for our Christmas Edition of AFR!

We’re a little late on it, but now, similar to the posts you see go up on here for recordings of past AFR broadcasts, we will also now do the same with past recordings of The Bear Raid presented by Tightwad Hill until the gang from the 97 year old pile of dirt gets a new website up for The Hill in the future. Below are the links to the first 4 broadcasts of this fan ran Cal themed podcast

Be sure to catch the next edition of the show on 12/13 @ 3 pm PST from The Concord Cottage!

This broadcast was dedicated to the late Ricky Ricardo, owner of Ricky’s Sports Theatre & Grill

Another offseason is at hand, fellow A’s fans, and “The DynAmic Duo” of Cpl Oaktown and The Bauce Man lead ya into it with our first broadcast of 2020/21 MLB Offseason. Click the links below to view either the Twitch or YouTube versions of the broadcast

Thanks as always for watching and we’ll catch ya again in 2 weeks for our next show! Also, if you are an A’s fan that is also a fan of Cal Athletics, be sure to check out the Cpl’s new side project, The Bear Raid presented by Tightwad Hill!

An idea that was first conceived on a pile of dirt near Strawberry Canyon in Berkeley over a decade ago finally became a reality last night as A’s Fan Radio Producer & Co-Host Keith “Cpl Oaktown” Salminen aired the debut edition of his long plan side project, “The Bear Raid”.

The show’s origins begin in the late 2000’s as Keith, who at this point in time was also planning ways to bring back AFR, began to have discussions with Tad Dellinger III, a fellow Cal fan from Tightwad Hill & also served as The Hill’s “29th Governor” from 2001-2012, about the idea of a show similar to AFR. The difference with this show: it would be dedicated to covering Cal Athletics and, in time, would be either set up as its own 24/7 internet radio station/podcast or as part of 24/7 station that would include other shows discussing various topics. The title, with Cal of course being the Golden Bears, would be “Bear Raid Radio” and would feature content and shows produced & hosted by Cal fans and even former Cal Student Athletes that would be interested in coming aboard.

Following the relaunch of A’s Fan Radio in October of 2011, Keith added a segment to the 2nd half of the show that would serve as the testing ground for Bear Raid Radio. The segment, titled “The Bear Raid”, debut in the fall of 2012 and covered Cal Football’s first season back at the newly renovated California Memorial Stadium along with what would turn into a dismal 3-9 season for the Golden Bears and also gave listeners a chance to hear many of the stories that make up the oral history of Tightwad Hill that you would only be able to hear in person at a game.

In the following years, Keith would add Cal Baseball, Cal Basketball and even Cal Rugby to the list of subjects along side Cal Football covered on “The Bear Raid” segment during the year. Tad also from time to time would pop in on some segments, usually either for a preview of the up coming Cal Football season or when looking back on what went down the previous season during a “season in review” version of the segment. There were also a few times that the segment would be recorded right on Tightwad Hill following a game to add a different dynamic to segment from time to time.

In 2020, Keith finally made the decision to launch “The Bear Raid” as its own stand alone podcast. Before he could being planning the launch of the show however, the Coronavirus Pandemic hit stateside in March, then the Pac-12 originally cancelled its football season, as well the rest of its fall sports programs, in August, all but dashing hopes of The Bear Raid launching in 2020 and looking like its debut would have to wait until 2021. However, once student athletes across the Pac-12 were able to convince the conference to resume fall sports, the launch of the show was back on and its debut set for November 12th following the release of the shorten Pac-12 Football schedule. The debut show however would end up getting delayed to the night of November 15th following the cancelation of the ASU game due to positive COVID tests with ASU Football and the addition of the match up with UCLA.

Joining Keith as part of the cast for “The Bear Raid” is Donnie “Knucklehead” Hudson, who started attending Cal games on Tightwad Hill around the same time Keith and Tad began kicking around the idea for this Cal themed podcast. Its also expected that at some point down the road that Tad will join the cast lineup as well. Keith is also open to fellow Tightwads, fellow Cal fans and former Cal Student Athletes joining on so it can in time become a show/program that cover all of Cal Athletics as Keith has envisioned its final form to be for so many years. The podcast will be sponsored & presented by Tightwad Hill. A’s Fan Radio will also continue to run their segment version of “The Bear Raid” on select broadcasts of their show.

Until Tightwad Hill launches a new official website, we have created a page here on our site that will house the links to past recordings of The Bear Raid. Live show broadcasts will air on our Twitch channel while recordings of past shows will be on Twitch as well as our YouTube channel. For more information in regards to both “The Bear Raid” & Tightwad Hill, visit facebook.com/tightwadhillofficial or follow @tightwadhill23 on Twitter. 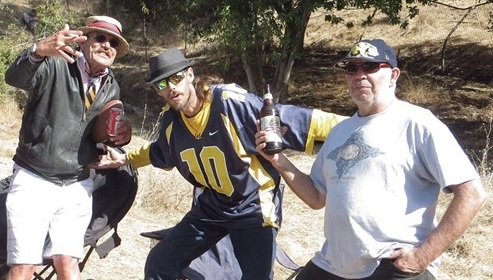 Miss out on our final regular season broadcast of the 2020 season? No need to panic fellow A’s fans, the links to the Twitch & YouTube versions of the broadcast are right down yonder to click on! This broadcast also marked the final time show producer Keith Salminen used the “Cpl RF Asshole” moniker as he will be rebranding himself as “Cpl Oaktown”.

Thanks for tuning in and also watching all of our regular season shows during this shorten 2020 MLB season. We’ll be back after a 2 week break on 11/23 for our first show of the 2020/21 offseason. Also, be sure to catch the debut broadcast of “The Bear Raid” as its own stand alone show next Thursday @ 8 pm PST on our Twitch channel! Keith & fellow Tightwad Hill member Donnie “Knucklehead” Hudson will serve as hosts for this first show.