As most you already know by now, after taking it away for 3 years and trying to replace it with the weak Fan Appreciation Tailgate, the OAKLAND Athletics finally got smart and decided to bring back the beloved FanFest. However, unlike in years past where the event was held in the Oakland Coliseum, this FanFest will be held inside the Oracle Arena as the Coliseum is being used for a motor cross event the day before.

Given that there is still no word on how the ballpark issue is going to pan out, it is time for a plan of action to send a message to Lew Wolff & John Fisher that we A’s fans DO NOT back a move to San Jose and that the A’s need to stAy in Oakland! Plans are in the works as we speak to put together a rally like the one that was held on Opening Night this past season, as well as the return of the famous FanFest Camp Out put on the Oakland A’s Bleacher Bums. As always, once more info comes forth, we will be the first to let you know what is going down.

Also, we are asking all A’s fans that own a Oaklandish “StAy” t-shirt to wear it to FanFest as our sign of protest through out the day. If you do not own one, you get one by clicking here or by going to ether the Oaklandish store located at 1444 Broadway in Downtown Oakland or the Oaklandish Mobile RV at the Grand Lake Farmer’s Market and its many other locations through out the week in Oakland. The shirt is made in sizes for both men and women.

It is time once again for us to join forces as one and make our voices heard that we A’s fans SAY NO TO SAN JOSE! KEEP THE A’S IN OAKLAND! 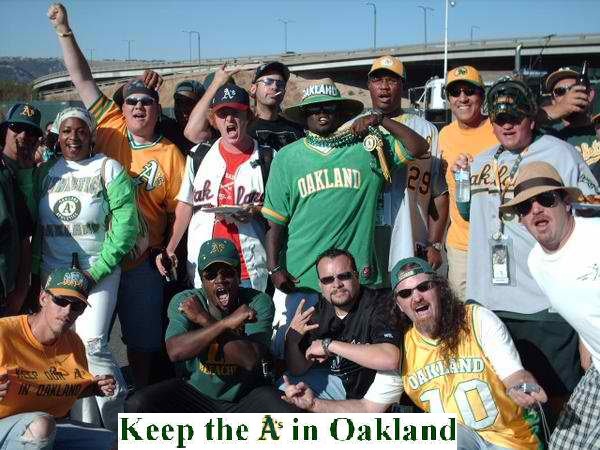 “Your #1 source for everything and anything on your Oakland Athletics since 2003!” A’s Fan Radio is an internet sports radio talk show produced and hosted by fans of the Oakland Athletics Baseball Club. Launched in 2003 and broadcasting until 2007 from La Estrellita Café & Bar at 446 E. 12th St in Oakland, AFR made its return from a 4 year hiatus on 10/27/2011. The show features original cast members Chris Dobbins and Keith “Cpl Oaktown” Salminen along with The Bauce Man, Ballistic Bill, Dano Wolfe and Tito Soulchild. Along with covering the A’s, AFR will also cover other Bay Area pro & college sports teams EXPECT the Giants, Kickin’ It With Kaval, the World Famous Weather Report w/ Kristen “Kwisty” Salminen, events in & around Oakland & beyond, Ballistic Bullshit, and, as always, MORE! For more info on “A’s Talk from the Fan’s Point of View”, visit: www.asfanradio.com www.facebook.com/asfanradio www.twitter.com/As_Fan_Radio View live show broadcasts @ www.twitch.tv/asfanradio View past shows & more @ www.youtube.com/channel/UCpI2Xb3bx2qdnl9QEtcMPJA The views and opinions of our cast, guests and listeners are in no way, shape or form affiliated with the Oakland Athletics or Major League Baseball
View all posts by A's Fan Radio →
This entry was posted in Events Around the Bay Area, Oakland Athletics Offseason News, The Battle to Keep the A's in Oakland and tagged fanfest, fanfest camp out, grand lake farmer's market, john fisher, keep the a's in oakland, lew wolff, oakland, oakland a's bleacher bums, oakland athletics, oakland coliseum, oaklandish, oracle arena, stay. Bookmark the permalink.