As we were unable to broadcast live due to low internet bandwidth, here is the recording of last night’s madness from Soundwave Studios:

Thanks for catching our final regular season show of 2014! We’ll be back at ya in 3 weeks when we kickoff the off-season edition of AFR on 11/6 from Dub-6 Studios. Till then, StAy OAklAnd, my friends! 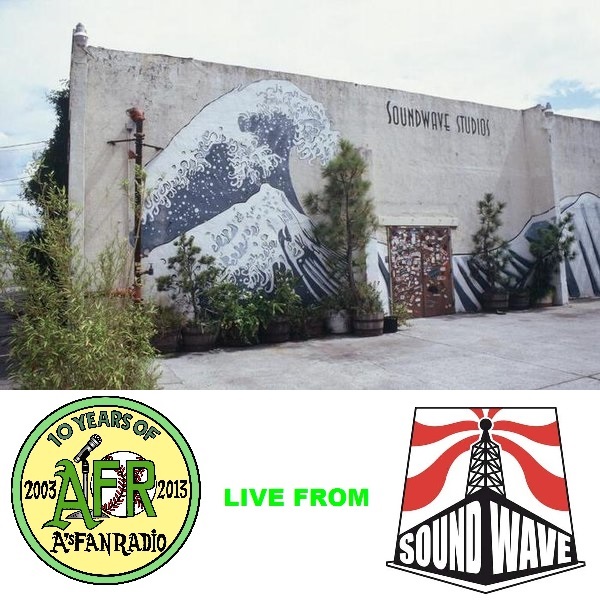 “Your #1 source for everything and anything on your Oakland Athletics since 2003!” A’s Fan Radio is an internet sports radio talk show produced and hosted by fans of the Oakland Athletics Baseball Club. Launched in 2003 and broadcasting until 2007 from La Estrellita Café & Bar at 446 E. 12th St in Oakland, AFR made its return from a 4 year hiatus on 10/27/2011. The show features original cast members Chris Dobbins and Keith “Cpl Oaktown” Salminen along with The Bauce Man, Ballistic Bill, Dano Wolfe and Tito Soulchild. Along with covering the A’s, AFR will also cover other Bay Area pro & college sports teams EXPECT the Giants, Kickin’ It With Kaval, the World Famous Weather Report w/ Kristen “Kwisty” Salminen, events in & around Oakland & beyond, Ballistic Bullshit, and, as always, MORE! For more info on “A’s Talk from the Fan’s Point of View”, visit: www.asfanradio.com www.facebook.com/asfanradio www.twitter.com/As_Fan_Radio View live show broadcasts @ www.twitch.tv/asfanradio View past shows & more @ www.youtube.com/channel/UCpI2Xb3bx2qdnl9QEtcMPJA The views and opinions of our cast, guests and listeners are in no way, shape or form affiliated with the Oakland Athletics or Major League Baseball
View all posts by A's Fan Radio →
This entry was posted in 2014 Baseball Season, Events Around the Bay Area, Oakland Athletics, Oakland Raiders, R.E.B.L. A's, Save Oakland Sports, Show (2014), The Battle to Keep Pro Sports in Oakland, The Battle to Keep the A's in Oakland, Tightwad Hill. Bookmark the permalink.

A baseball publication that resigns to the awkwardness of life and the 8-1 putout...Stay in Oakland! (cococrispafro@gmail.com)